With ever rising population there is an increase for demand of water. On the other hand global climatic conditions like el Nino and la ninaare posing challenges in predicting weather conditions.  Though the average rainfall has not changed but in the recent past there are heavy rains in shorter windows.  Watershed management helps in ground water retention. But what if there are periodical droughts like we had last year in Central India due to which water has to be transported in trains. With change in food habits and dependency on rice water availability is a very important factor for majority of population in central and south India.

We are studying the linkage between population and water availability and chose Medak district of Telangana. Medak has a population density of 312 persons per sqkm which is almost 3 times that of Spain. It has seen a 13% raise in population increase in the last decade (Analyzed from census data available here). Due to proximity to Hyderabad it has seen a 89% growth in urban population. If there is a drought these numbers indicate that there is ever growing population which face the risk of stress for water resources. 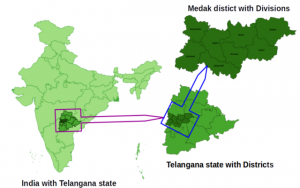 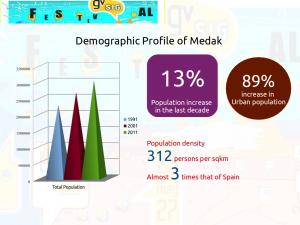 With open data gaining focus and availability of open source tools for Remote sensing and GIS analysis for monitoring water, crops and soil resources has become more affordable.Raster data classification carried out for the openly available satellite datasets using raster operations in gvSIG. Thus resulted Water bodies extracted from respective sets of 1995 and 2015 and correlated with one another.

The final results correlated with domestic and irrigation demand for water. Demand for water is a cyclic process between water availability and consumption with practices like agricultural yields, migration, urban-population, food processing consumption. Demand for water for domestic consumption is at 200 liters per day per person and for agriculture it varies from crop to crop. Paddy takes 3000 to 5000 liters per kg and Jowar takes around 600 liters per kg. When these numbers are correlated with water availability derived from satellite data  it will be more helpful to the decision makers in their estimates and predictions. Based on the surface area we came up with the ratio of surface water area to total population. From our calculations we found that in 2002, the ratio is 7251 and in 2015, the ratio is 54000. There is almost 8 fold increase in this ratio leading to severe stress to water resources. It means that the resources available for 7251 people in 2002 are shared by 54000 people in 2015 which might have led to many changes in quality of life.

Rice, jowar, bajra, sugarcane, black gram, red gram, bengal gram, cotton, groundnut are the major crops sown in the district. Due to scanty rainfall severe water scarcity arisen with which agricultural practices decreased. In 2012-13 an area about 9,325ha being irrigated by surface water sources and 145,452ha irrigated by ground water. About 55% increment in bore well irrigation and a decrement about 25% in canal irrigation, 117% in tanks irrigation. If the situation continued further, there will be many challenges to meet the demand for water.

Consequences of water scarcity on Population:

Lesser water availability leads to bad agricultural yields. When agriculture which is primary sector in India fails, then it leads to migration of people dependent on agriculture. A agriculture labor may end up in city to become a construction worker. Similar changes in other agri-dependent populations leads to migration which increases urban population. Urban areas consume more of processed food like breads which might again lead to cultivation of water intensive crops leading to more stress on water availability.

As published in our previous blog  Indian government is increasing in spending in water conservation and with help of other best practices in agriculture is trying to increase yield of crops. Indian Government has set up panels to double the income of farmers by 2022.   These efforts on preserving ground water and also improving rural economy would help reduce the stress on water resources and lead to sustainability in coming future.

Share this:
Population and Water
Tagged on: Analytics    remote sensing

One thought on “Population and Water”